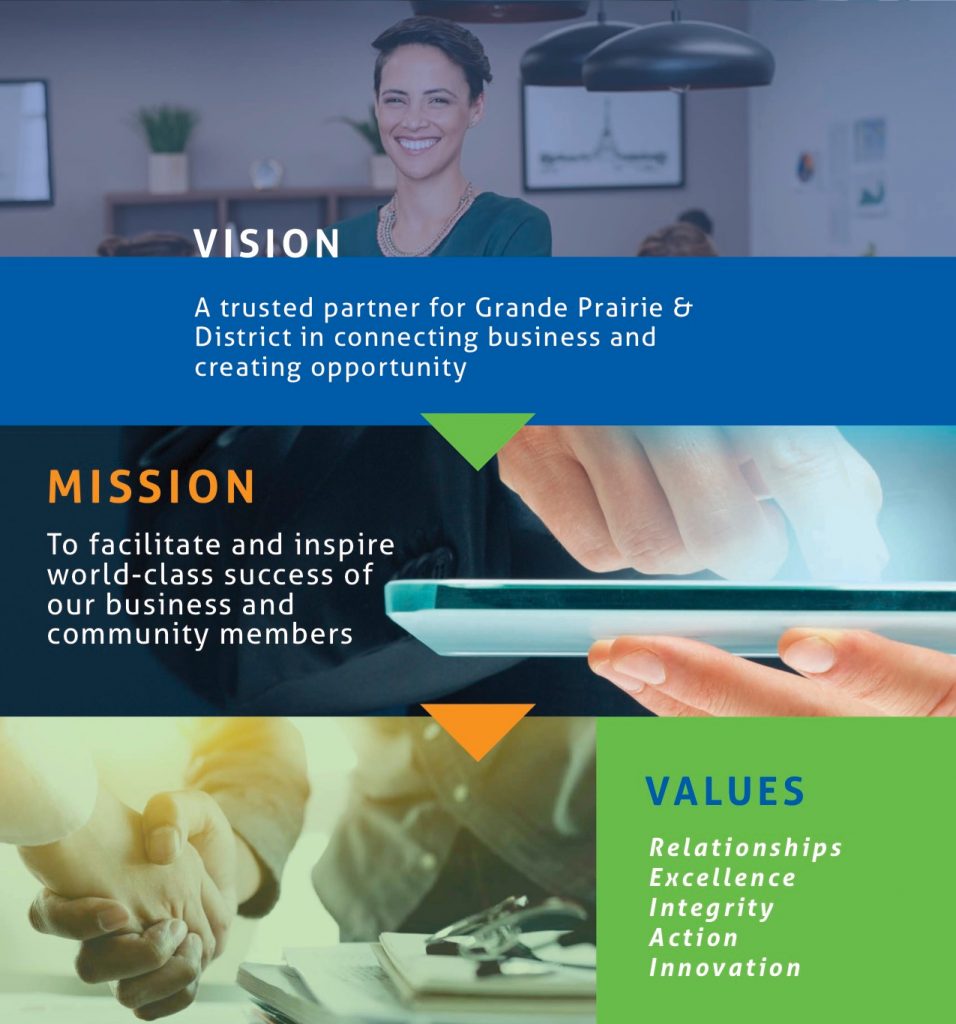 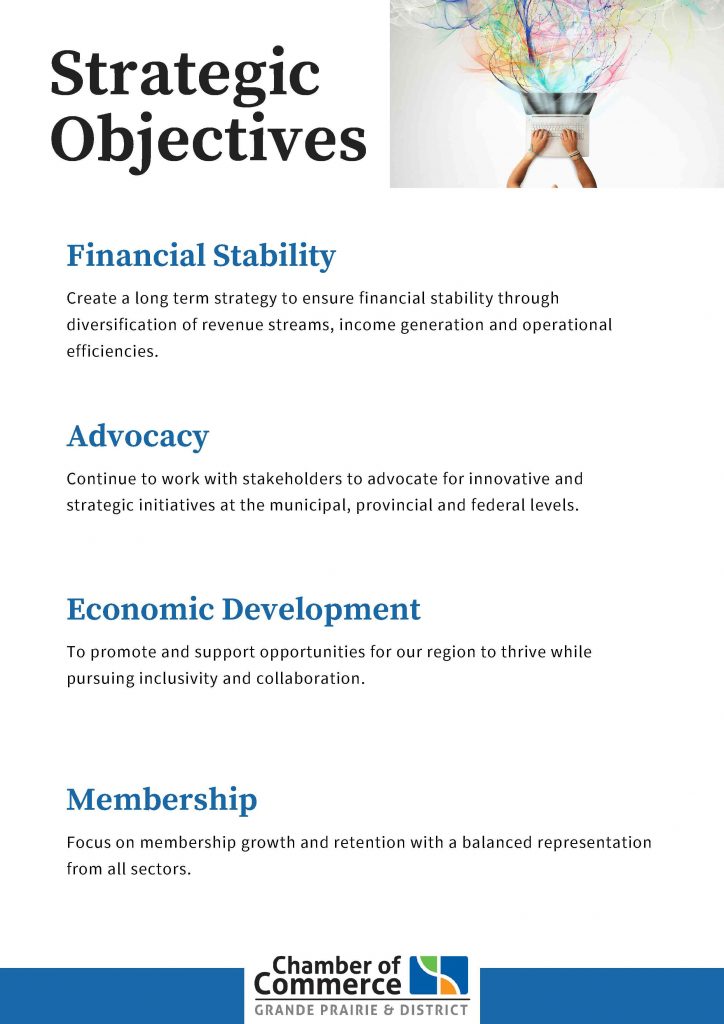 What is a Chamber of Commerce?

A Chamber of Commerce, also called a Board of Trade, is a not-for-profit voluntary organization. The organization is composed of progressive individuals and businesses. They work together to advance the commercial, financial and civic interests of a community.

The Grande Prairie & District Chamber of Commerce is the 3rd largest in Alberta. We have over 1,100 members, who employ over 20,000 individuals. We serve our community and members in various ways, while focusing on connecting businesses & creating opportunity.

We are trusted partners on various committees within the Grande Prairie community. We also work with neighbouring chambers of commerce and local municipalities. Our goal is to connect our members with information and with one another.

The Grande Prairie & District Chamber of Commerce acts as a unified voice for business of all sizes and interests. Our Chamber partners in the highly-respected advocacy and policy efforts of the Alberta and Canadian Chambers of Commerce to monitor pending legislation and regulation, and act on behalf of our Members to ensure the development and promotion of activities that ensure the Grande Prairie region's business community's growth and prosperity. The Chamber also offers our Members networking, promotional, and educational opportunities as well as optional value added benefits. Contact our office for more information.

Why do we need YOU? Because your voice counts! 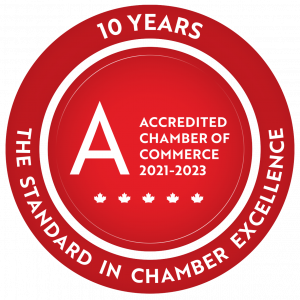 On behalf of the Chamber Accreditation Council of Canada (CACC), we are pleased to announce our chamber’s application for reaccreditation has passed the Council’s examination and our Chamber has been accredited for a period of three years – 2021-23.
In 2004, the chamber accreditation program was launched. To achieve accreditation, a chamber must meet minimum standards in critical areas pivotal to a Chamber’s success. Accreditation is the acknowledgement that a chamber has been successfully evaluated against a rigorous set of national standards and has demonstrated excellence in chamber management. We’ve now achieved 10 years continuous accredited status!
"You are part of a group of elite chambers of commerce in Canada that can verify to the business community locally and nationally that your organization is run in a strategic and professional way and has reached the standard in Chamber excellence." - Shelley Morris, Chamber Accreditation Council of Canada. 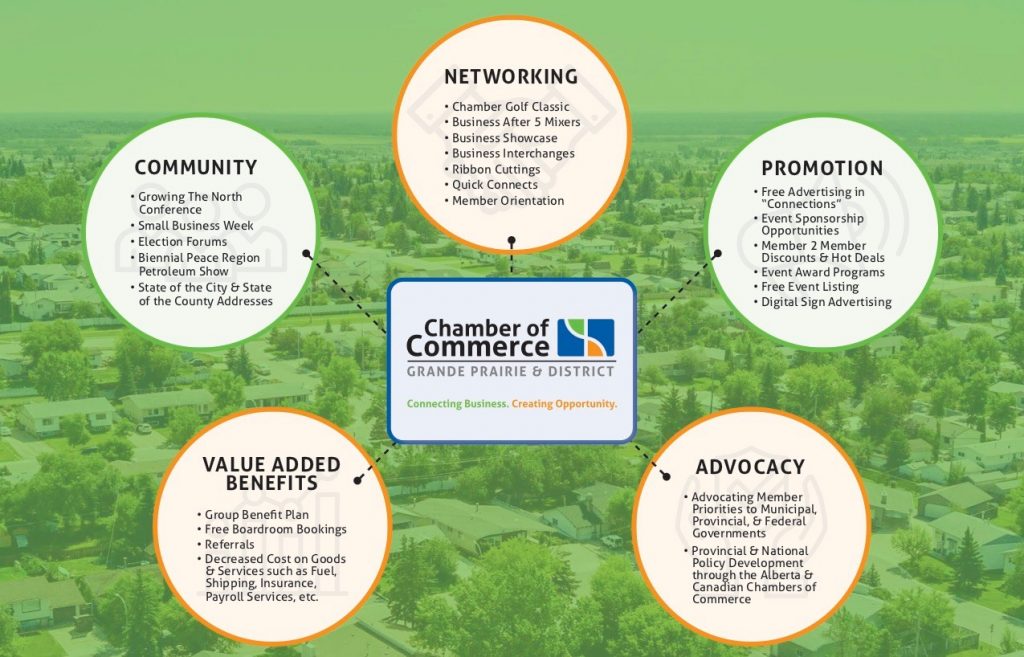 The history of the Chamber closely parallels the development of its municipalities. The Grande Prairie Board of Trade and Chamber of Commerce was incorporated in 1915, just one year after the village itself was incorporated. This was before there were any roads or trains into the Peace Country, and the only means of access into the area, for people and supplies, was through via Pioneer Trail.

The purpose of the Board of Trade was to promote the Grande Prairie district as an excellent place to live, farm, do business and develop resources. The issues of the day were based in the need for improved roads and highways; affordable and adequate rail freight service; airports and commercial airlines; agricultural and economic policies; the education system; services such as water and sewer, telephone, radio and television; resource and industrial development; and support for the business community.

In 1952, the name of the Grande Prairie Board of Trade and Chamber of Commerce was officially changed to the Grande Prairie Chamber of Commerce. As surveys and economic development reports were now being produced by various levels of government the Chamber turned its attentions to more specific programs within the community including resource and industry conferences, retail surveys, business and industry trade shows, and tourism.

From its inception, the Chamber has been active with other provincial and Canadian Boards of Trade and worked jointly with political and labour groups to achieve common goals. Sending resolutions or delegates to Edmonton or Ottawa, or bringing speakers to the community who can influence matters relevant to the region's businesses, were, and still are, common tactics which achieve results.

As the region has grown, so has the the need for a unified voice to advocate the best interests of the district and its businesses to all levels of government. The Grande Prairie & District Chamber of Commerce continues a long-standing legacy of Connecting Business and Creating Opportunity for networking, education, advocacy, and policy development to encourage regional prosperity.